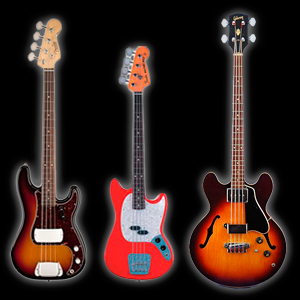 These are the basses I played in the early Road: Fender Precision, Fender Mustang, Gibson EB-2. Back in the late 60′s The Road was about to record their first album. I was playing Fender Precision basses and The Gibson EB-2 but neither bass had the punch I wanted to to cut through the tracks. I didn’t use a pick which probably would have worked but I didn’t have any technique playing with a pick and did’t like the sound of a pick either. One day I was at Kenmore Music on Delaware Ave in Buffalo NY and I picked up this red Fender Mustang bass. It was a small bass but it had the sound I though might work for this album. I asked the owner of Kenmore Music (Dave Keys) if I could borrow it for a week and he said yes. So the band headed off to Syncron Recording Studios in Wallingford CT with Joey Reynolds (a DJ at WKBW in Buffalo) producing us. I recorded the whole album with The Mustang except for the song She’s Not There. For some reason I used the Gibson EB-2 with a pick on that song. I was never happy with that track as I wasn’t good with a pick but it became a hit for us on the East coast. I did get the sound I wanted on the rest of the album with the Mustang.
Categories: Uncategorized|Tags: |0 Comments